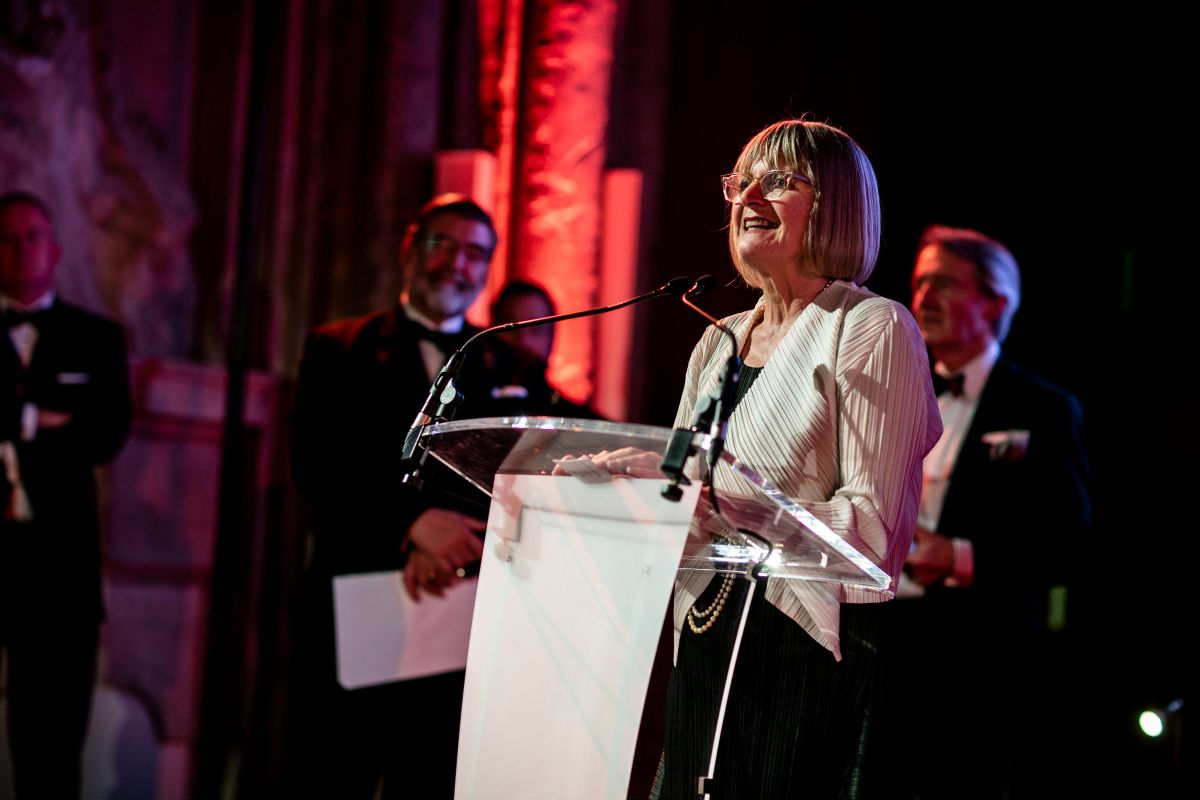 Jancis Robinson never planned to be where she is today. The course of her life has been “a lucky succession of serendipity. My career has always been a series of responses to external stimuli. I’m very organised, and as a family we’re obsessive planners, particularly of holidays, but in terms of my career, I’m hopeless at saying ‘I think I should do this or that’.”

We’re sitting at the big picture window of the spacious flat Robinson shares with her husband, the restaurateur and critic Nicholas Lander, on the fourteenth floor of a new block in London’s King’s Cross. It’s cool and modern, a nice mix of the lived-in and the luxurious. The walls are lined with books, there’s wine everywhere, and it’s not overly tidy (four grandchildren visit regularly and there are boxes of toys shoved into corners).

Robinson is 70 in a couple of years and she seems at least a decade younger. The only reference she makes to her age in the two hours we spend with her is when she ruefully admits she and Lander no longer drink a bottle of wine a day between them. Indeed, on receipt of the IWSC Lifetime Achievement Award, she worried that it might make people think she was thinking of retirement. “Nothing of the sort! I will accept only if you make it 100% clear that I have no intention of giving up.”

I don’t doubt it. She’s given up most of her travelling for a year while she works on the 8thedition of the World Atlas of Wine (4.5m copies sold) which she edits with Hugh Johnson, she’s just brought out a range of glassware with the designer Richard Brendon; she writes the weekly wine column for the Financial Times which she’s been doing for 28 years, and she manages an international team of eminent writers on jancisrobinson.com, her comprehensive website.

Robinson’s influence lies not so much in her ability to get people buying wine, but appreciating it. Her writing style is transparent (I’m sure she subscribes to Orwell’s dictum that good prose should be like a windowpane). Is demystification important to her? “Yes. The last thing I want to do is maintain that kind of snobbery. Wine is a complex subject, but it shouldn’t be exclusive.” Many consider her greatest achievement is the magisterial Oxford Companion to Wine, now in its fourth edition, which the Washington Post describes simply, and with justification as “the greatest wine book ever published”.

There are a few threads that run through the four-and-a-bit decades that Robinson has been involved in wine. First, there’s an urge to get away: she grew up in Cumbria, possibly England’s loveliest and least-populated county. “Eighteen years in a village of 40 people with no playmates and no fleshpots.” What values did such an upbringing instil? “It made me love London. And love travel.” The latter, of course, is a given for a wine writer, and (2018 aside) she’s an indefatigable traveller, and loves to discover new wine regions like Baja California, where she was recently. “I found a thriving wine culture. It’s very touristy, a bit like a new Napa, with lots of development. Heaven knows where the money comes from.”

The last comment is characteristic: there’s always a question to ask. “I am deeply sceptical and cynical. I don’t accept the given line.” She “hates” controversy, she says, but doesn’t shy away from it either.

Another thread is an unwillingness to conform. On one level she’s the embodiment of the wine establishment, but when she wonders aloud, “Am I still an outsider? I don’t think I can claim to be that,” there’s still a hint of doubt. This is remarkable, considering that we’re talking about someone whose lists of awards (“The Groaning Mantelpiece” as she calls it) takes about ten minutes to scroll through on her website. I stopped counting at 100, but suffice it to say she has won the James Beard four times, the André Simon, the Glenfiddich 10 times, the Julia Child, the Roederer; she’s been honoured by the French, the Germans and the Italians, and has a clutch of honorary degrees and doctorates, and the OBE in 2003, one of the highest civilian awards in the UK. Which has meant most to her?

“Of course the OBE was a great honour, but in a funny way the one that meant a lot was the Vintners’ award (in 2013 she was made honorary Freeman of the Worshipful Company of Vintners, the 26thperson to be so honoured in the company’s 650-year history). It was nice to be recognised by a segment of the trade that I was slightly kicking against when I started.”

Jancis (like Madonna, or Oprah, she is mononymous) is a formidable presence on the London wine scene. She has a reputation for unapproachability but that’s simply her work ethic: she makes quite clear she doesn’t like to be interrupted when she’s tasting. Off duty she’s warm and gossipy. “My respect for her writing and insight - and her wit - has not diminished in the 15 years we have worked together,” her second-in-command Julia Harding MW says.

“She has a scholarly side which can come across as austere, but beneath that she's a hedonist,” the novelist Julian Barnes, a long-standing friend, has said of her. She approves of that. “I’m a Taurean who likes pleasures. The hedonism is after six o’clock. I never ever work at night.”

This ability to compartmentalise may well be the secret of her success. That, and her constant urge to question. Just as she sits in her penthouse (glass in hand, if it’s after six) and surveys that marvellous panorama of London, so she looks over the international wine landscape. It’s a rare ability to belong to and understand a particular world, while remaining objectively critical. Jancis makes it look easy, which in one sense it is. As she says, there’s no grand plan: “I just get on with it.”

I created L’Académie du Vin in Paris in 1973, next door to my shop Les Caves de la Madeleine. Thanks to my mentor Michael Broadbent’s seminal book, Wine Tasting, published in 1969, I was able to structure the courses in an educational manner.

L’Académie was the first private wine school in France, and within a year or so we were teaching the French as well, including young sommeliers. L’Académie became internationally famous in 1976 for holding what became known as The Judgement of Paris, a taste-off between wines from California and France.

In 1989, I returned to London from Paris and the school was closed down, but in 2017 I was able to revive the name. With offices in Paris, London and Toronto, L’Académie du Vin lives again with the aim to “create, encourage and award excellence in wine education and appreciation”.

I have formed L’Académie du Vin Collection to publish wine memoirs, monographs and reference books and also to re-publish books from the past. The first will be a re-print of Michael Broadbent’s Wine Tasting, which is where this all started.