South Africa 2022: discover what our judges got up to after they'd finished each day's judging... 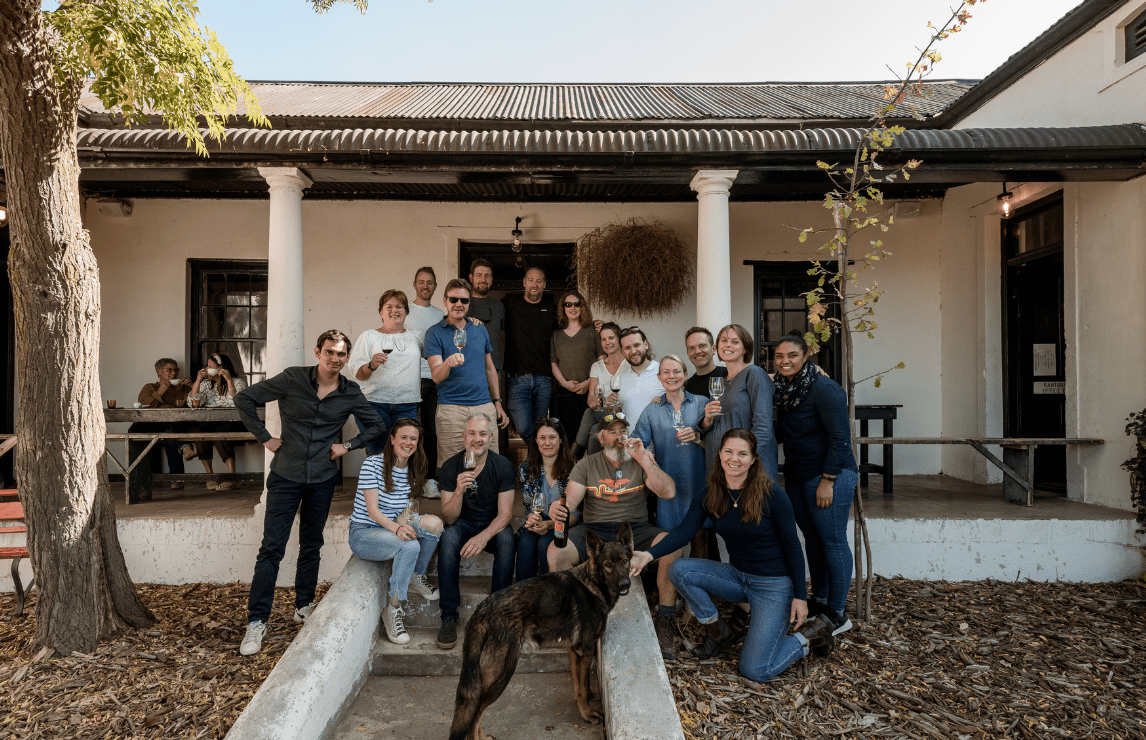 The IWSC’s South Africa wine judging took place near Paarl this year, with the visiting team from the UK joined by eminent local specialists for three days of deliberations.  Senior judge David Kermode, was among those on the trip - and here he reflects on how they spent their time when they weren’t judging.

South Africa’s wine industry has had it tougher than most over the past few years, producers paying a painful price for arbitrary alcohol restrictions and severe drought conditions, so it was wonderful to witness so much positivity, innovation and - above all - quality as the IWSC judging team spent its non-judging hours getting to know the country’s wine scene more intimately.

The serene surroundings of Diamant Estate were home for the week but, aside from the judging sessions, the visiting team - led by Alistair Cooper MW, with my fellow panel chairs, influential retail buyers Elizabeth Kelly MW, of Majestic Wine, and Victoria Mason of Waitrose, an MW student, plus winner of the World’s Best Young Sommelier, Matteo Montone MS - had plenty of time to explore, with an itinerary carefully crafted by Sophie Jump.

Naturally, our first call was to IWSC President Johann Krige, CEO of Kanonkop Wine Estate - four times winner of the IWSC’s Winemaker of the Year accolade, and recipient of Outstanding Producer of the Year in 2019 - where we were joined by Mike Ratcliffe, Managing Director of Vilafonté and Chairman of Stellenbosch Wine. 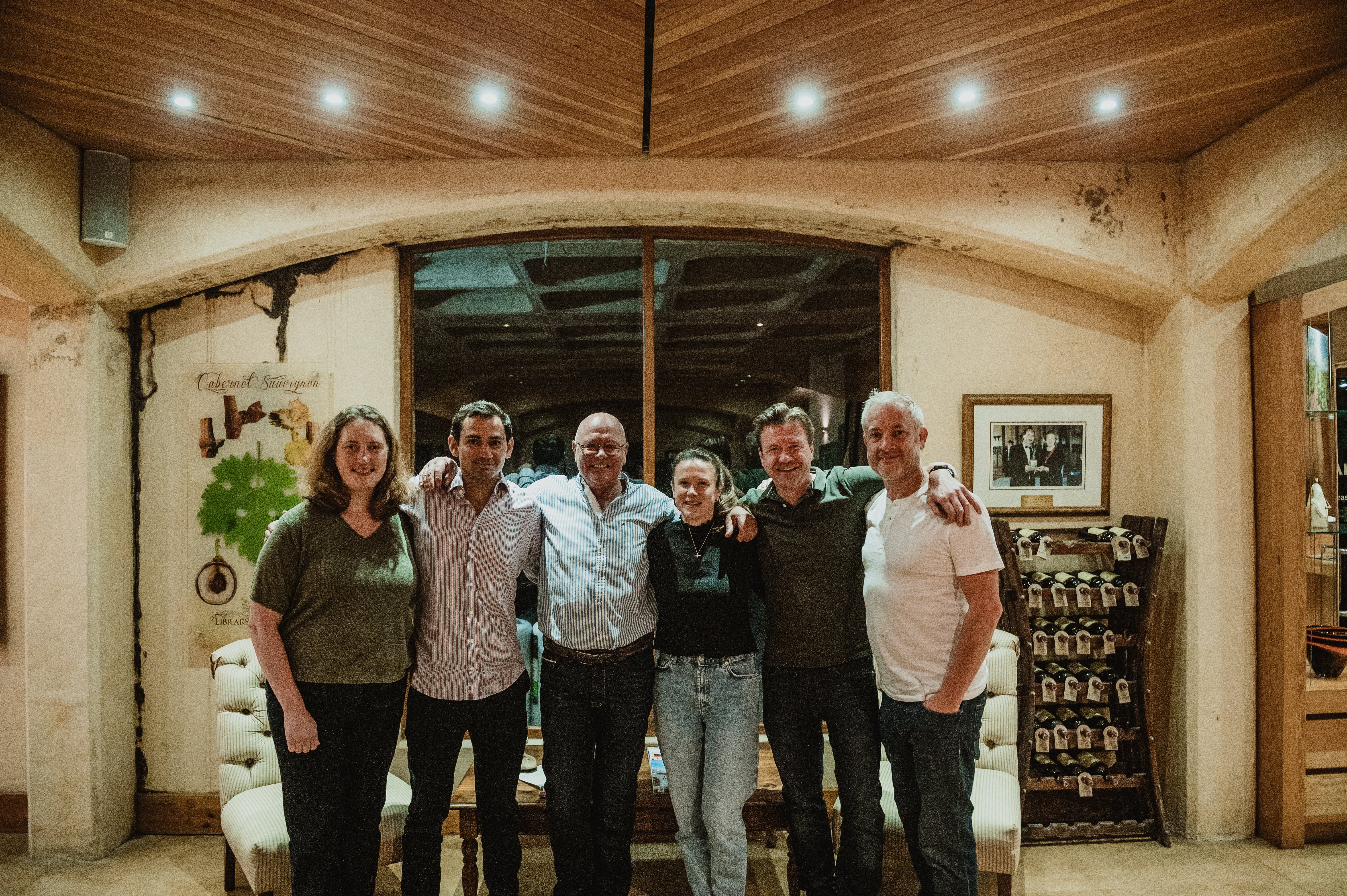 A welcoming glass of rosé Pinotage was followed by a brief tour and then a fascinating tasting, led by winemaker Abrie Beeslaar, of six cuvées of differing vintage - Pinotage, Cabernet Sauvignon and Bordeaux blend, Paul Sauer - including a spellbinding ’04 Cabernet Sauvignon, with which I’d have happily settled down for the night.  Then, as a measure of what was to come, in terms of the warmth of South African hospitality, a relaxed supper of chicken pie cooked by Krige’s wife, Marie, accompanied by relaxed chatter, a smattering of classic vintages from the Kanonkop cellar, all rounded off with a 1963 KWV Crusted Port.  It was some way to start.

After a day one gold rush in the judging room, the upbeat vibe continued into the evening, with a short hop to the Spice Route tasting room, to take in a mesmerising Cape sunset, followed by an introduction from André Morgenthal to the wines of both Agulhas, a breezy maritime triangle at South Africa’s southernmost point, lying between the Atlantic and Indian Oceans - and also the groundbreaking Old Vine Project.

It was fascinating to get a taste of the passion behind the project, with its use of historic planting data to award a globally unique ‘Certified Heritage Vineyard’ seal on bottles of wine made from vines aged 35 years or over, an initiative begun by legendary winemaker Rosa Kruger some twenty years ago.

Jump had asked Morgenthal and his winemaking colleagues to offer 12 wines across the evening, but they arrived with 23, including some older vintage renderings… so, unsurprisingly, the only complaints came when it was time to go home.

Personal highlights from Agulhas included an ethereal Ghost Corner Wild Ferment 2017 Sauvignon Blanc and pepper-flecked Trizanne Signature Reserve Syrah 2017. While  the old vines yielded an embarrassment of riches including Skerpioen 2020 from Sadie Family Wines, a scintillatingly saline blend of Chenin Blanc and Palomino from vines planted in 1962; a texturally tantalising Harslevelu, Lammershoek Hardeblaar 2016, from 40-year-old vines; a lovely lithe Cinsault Pinotage blend from Imvini Wethu, the older elements dating back to the 1930s; and also a dynamic red and white duo of intriguing, natural, qvevri-fermented wines from our dinner host, Spice Route’s Charles Back. 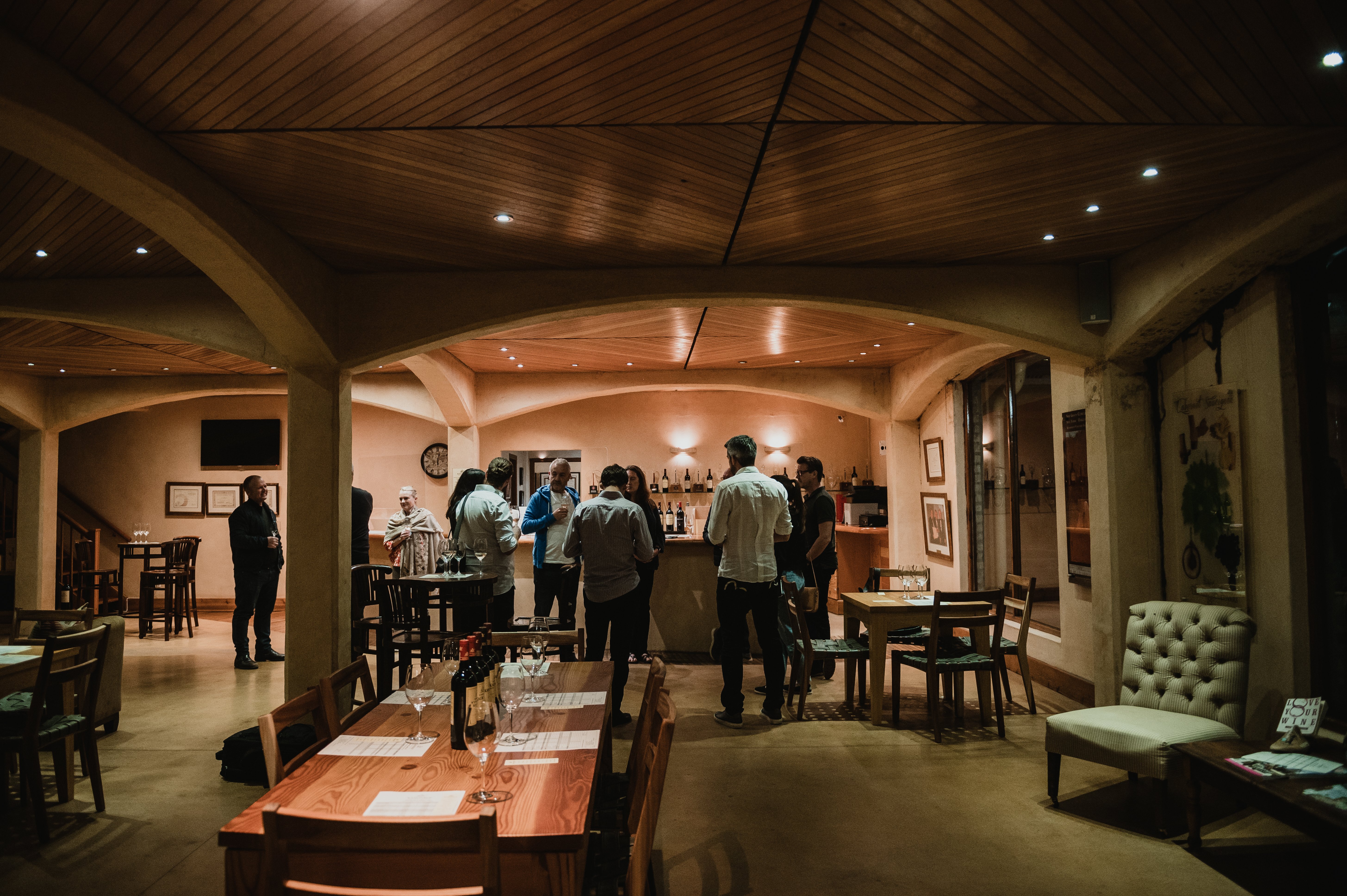 After Wednesday’s judging session came an eagerly-anticipated trip to Vergelegen Estate, which did not disappoint. Established in 1700 on the slopes of the Hottentots Holland mountain range, a wild fire burning in the distance (and thankfully since extinguished) did nothing to diminish the sheer, awe-inspiring beauty of the place.  Owned by Anglo-American, the mining conglomerate, since 1987, the scale of its investment in the wild surroundings might not be immediately obvious, because much of the money has been spent returning it to nature, with an extensive programme of clearing invasive alien (and often very flammable) vegetation to allow indigenous species to thrive instead.  A Land Rover tour to the ‘Champagne tree’, for Method Cap Classique and oysters, was briefly halted by a herd of elands, who allowed us to move on in return for a box of carrots.

Vergelegen is rightly renowned for the consistently high quality of its wines, crafted by soon-to-retire winemaker, André van Rensburg, and tasting highlights included the intensely aromatic, focused and utterly delicious white Bordeaux blend, GVB 2020, and the complex and luxurious flagship Cabernet, V 2016.  A delicious dinner in the iconic, Dutch gabled main house was hosted by charismatic Managing Director, Wayne Coetzer, who outlined his vision of evolution for the estate.  Coetzer has built an infectiously enthusiastic team and the judges went home buzzing.

Thursday afternoon saw us travel to the beautiful Devon Valley, overlooking the Stellenbosch mountains, to visit Le Grand Domaine, owned by Bernard Fontannaz.  A winery tour and sampling of Sauvignon Blanc tank samples, guided by winemaker Debbie Thompson, was followed by a tasting of the completed wines, including an impressive Origin ‘The Pledge’ 2021 Sauvignon Blanc and vibrant Stellenbosch rosé.

Sampling wine famously makes you hungry, so it was just as well our next stop was Warwick Estate, in the foothills of Simonsberg Mountain for the South African institution that is the braai, a never-ending, high-end barbecue.  Hosted by CEO Christiana Von Arnim, husband Takuan, sales boss Tom Orpen and the estate’s celebrated winemaker JD (Johannes Diederick) Pretorious, we were treated to a superb tasting - including the beguiling, textural White Lady Chardonnay, its very special, limited edition Cape Winemakers Guild iteration, and the sumptuous Cabernet-Franc-led 2014 Trilogy Bordeaux blend - while conversation ranged from winemaking to sustainability and, later, rock music.

Friday saw us wave goodbye to the comforting calm of Diamant Estate, as we headed northwest to Swartland, an arid region of scorched, savage charm that also happens to produce some of South Africa’s most innovative and sought-after wines.

You had to pinch yourself to remember it was winter as, basking in sunshine, we toured the still-golden Chenin Blanc bush vines with Chris Mullineux, where we learned about the experimental use of indigenous fynbos as a cover crop, protecting precious moisture and also creating a habitat for the natural predators of vineyard pests. 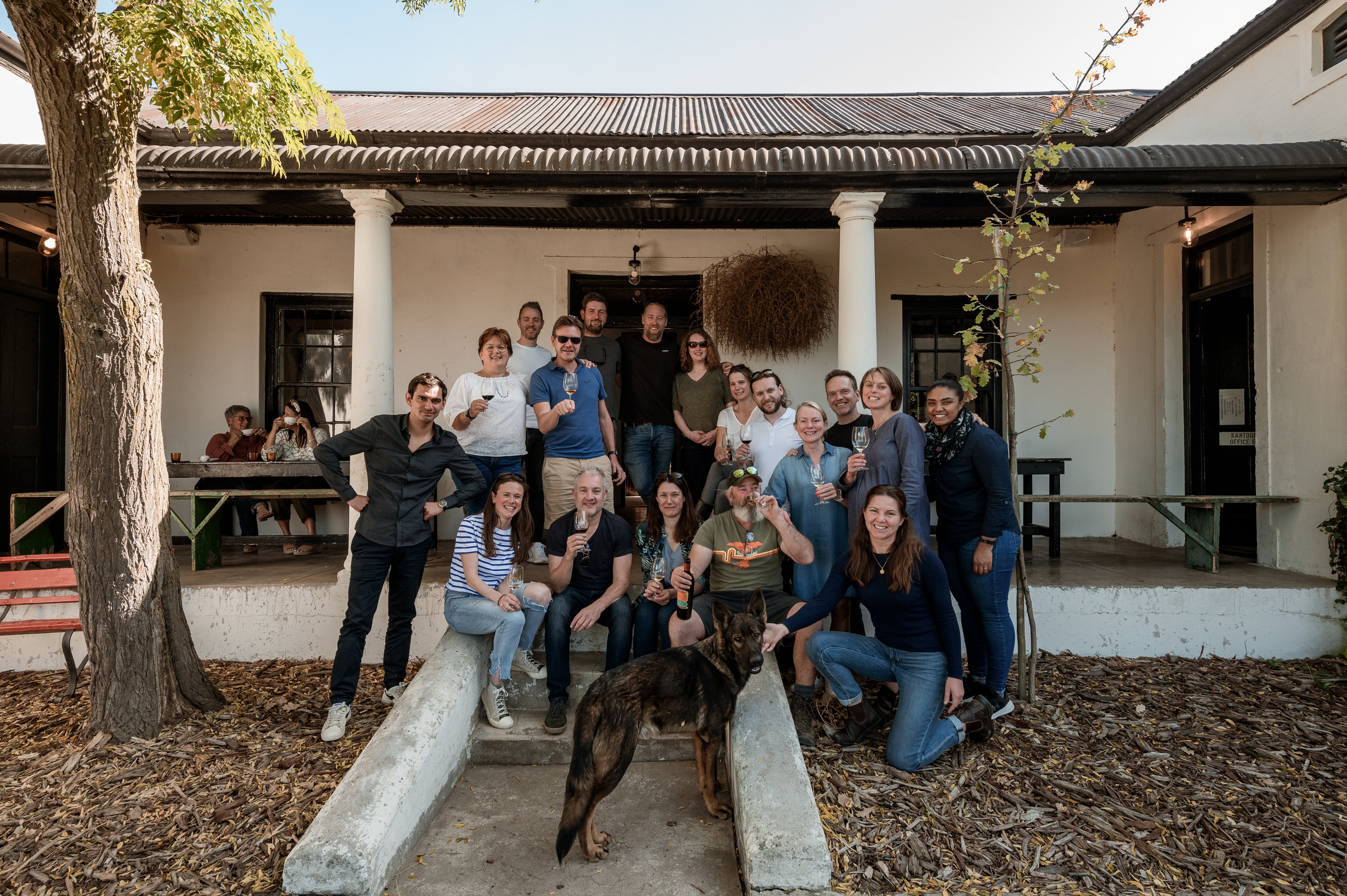 The IWSC judges, together with Adi Baadenhorst and Chris & Andrea Mullineaux and their teams

Our final stop was the natural amphitheatre of Paardeberg mountain, for a comprehensive tasting from a diverse group of Swartland’s finest - including our host for a delicious fresh-from-the-farm lunch, Adi Badenhorst, alongside wines from Mullineux, David & Nadia, Rall and Huis Van Chevallerie - all of them deliciously idiosyncratic, a chance to properly understand what makes Swartland so special.

It was time to go home, for me at least (most of the others were off to Camps Bay for the sunset and to taste the wines of Duncan Savage), but what an unforgettable experience.  It was an honour to be in South Africa, judging in situ, alongside a fantastic team of local experts, but more to the point, the opportunity to combine our judging responsibilities with achieving a greater understanding and appreciation of the region has made for some incredible memories.

The IWSC's 2022 South Africa medal results will be announced on Wednesday 15 June. Discover information from Alistair Cooper MW on how judging went here and here.